On March 6, 2019, Howard University hosted its third annual International Women’s Day celebration in the Interdisciplinary Research Building (IRB) from 3:00 pm - 5:00 pm.  This year’s theme was #BalanceforBetter and was chaired by Dr. Josephine Dawuni from the Political Science department and Convener of the Women and Gender Studies Collective at Howard University.  The guest panel, moderated by Ms. Linord Moudou,  was comprised of Dr. Obiageli Ezekwesili and Dr. Hauwa Ibrahim. 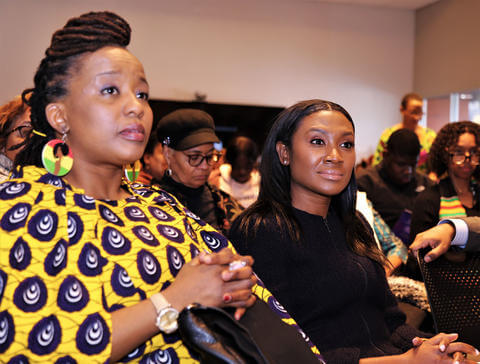 The event began with Oprah Winfrey’s 2015 women’s empowerment Golden Globe speech, followed by a video displaying pictures of  successful Black women throughout history as the song “Strong Girl” played and the audience, filled with students, faculty, ambassadors and other dignitaries looked on.  As the music faded, Dr. Dawuni approached the podium to extend a welcome to the audience and gave an introduction with a brief history of women’s day, stating that the event was to, “address the many issues women and girls face within Howard University, Washington, D.C., the U.S., and around the world.”

Next were greetings by the administration, first by the provost, Dr. Anthony Wutoh followed by Dr. Tashni Ann Dubroy. Dr. Dubroy said, “March holds a special place in my heart because we get to celebrate a lot of powerful women, women who have accomplished so much [but] men don’t be jealous, Father’s Day is coming up!”

Internationally renowned performing artist, song writer, comedian, poet and mother, Ms. Anna Mwalagho, provided the interludes for the day’s event.  Ms. Mwalagho gave a hilarious excerpt of her one woman show with the headline, “I Never Thought I Was Black Until I Came to America.” She continued to tell different jokes and anecdotes on her experiences coming to America as an African women immigrant and how with little money there were still ways to uphold her dignity.  She closed her performance with these words: “We [women] are unique, beautiful, and wonderfully made. I am enough, you are enough, we are enough.”

Following Ms. Mwalagho’s performance,  Dr. Anita Plummer provided the introduction of the guests of honor. The guest moderator, Ms. Linord Moudou, is a seasoned journalist and TV personality with over a decade of experience, including as a host and reporter for Voice of America (VOA).  Additionally, the audience was graced with the pleasure of two guest speakers this year. Dr. Obiageli Ezekwesili is a former Nigerian Minister of Education, former Vice President for the World Bank in Africa, co-founder of #BringBackOurGirls movement, among many other accomplishments.  Dr. Hauwa Ibrahim is an international human rights and Sharia law attorney, author, envoy for the United Nations program for European Union initiatives on girl child education, to name a few.

Ms. Moudou opened up her moderation by giving an opening, welcome and discussing the strides women have made throughout the years. She asked Dr. Ibrahim and Dr. Ezekwesili about their thoughts on this year’s International Women’s Day theme and their personal journeys toward success. Other topics discussed included their thoughts on promoting women’s education in STEM. Moudou specifically discussed the challenges and success Dr. Ezekwesili has faced with the #BringBackOurGirls movement as well as the obstacles and triumphs Dr. Ibrahim encountered as a women in courtrooms under Sharia law. 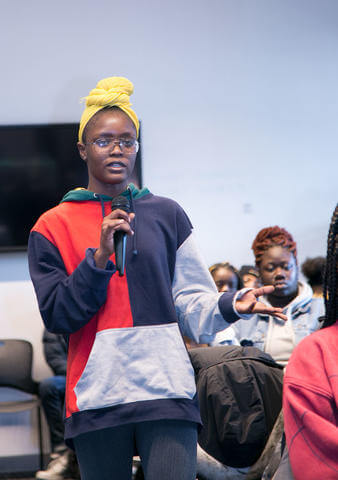 The panel discussion concluded with final statements on International Women’s Day. Dr. Ezekwesili stated, “...the greatest barrier to women is the self imposed one. Now is the time for women to allow those barriers to come crashing down and part of the way to make that happen is for the sister to sister affect to take a very strong hold. The younger ones and older ones must work together to take down those barriers...Embrace the world with a lot of courage. Courage is in demand.”  Dr. Ibrahim concluded by saying to the women of the audience, “You are the best and you can be the best. Tell yourself each day when you wake up that be whoever you want to be. don’t stay still, don’t walk, don’t run, but fly….You are too uncommon to be common.”

A Q&A session was led by Dr. Msia Kihona Clark followed by a second interlude by Ms. Mwalagho. Next, Dr. Dawuni, with the assistance of Associate Provost Dr. Okianer Dark, returned to the podium for a presentation of awards in which Ms. Deborah Elliott received the Staff Service Award.  Drs Ezekwesili and Ibrahim were the recipients of the International Women’s Day Vanguard Award, created to give recognition to women who have contributed significantly to advancing women’s rights in the social, cultural, political and economic arenas.