The Theory of Change

The Howard University Center of Excellence in Housing and Urban Research and Policy (CHURP) seeks to achieve an equitable and inclusionary society in which currently underserved populations come to be properly served and inequities in housing, health, education, economic well-being, and community development, are overcome through policy implementation.

Blocking this goal are the mutually reinforcing historic and current processes that led and continue to lead to disparate outcomes for underserved populations. 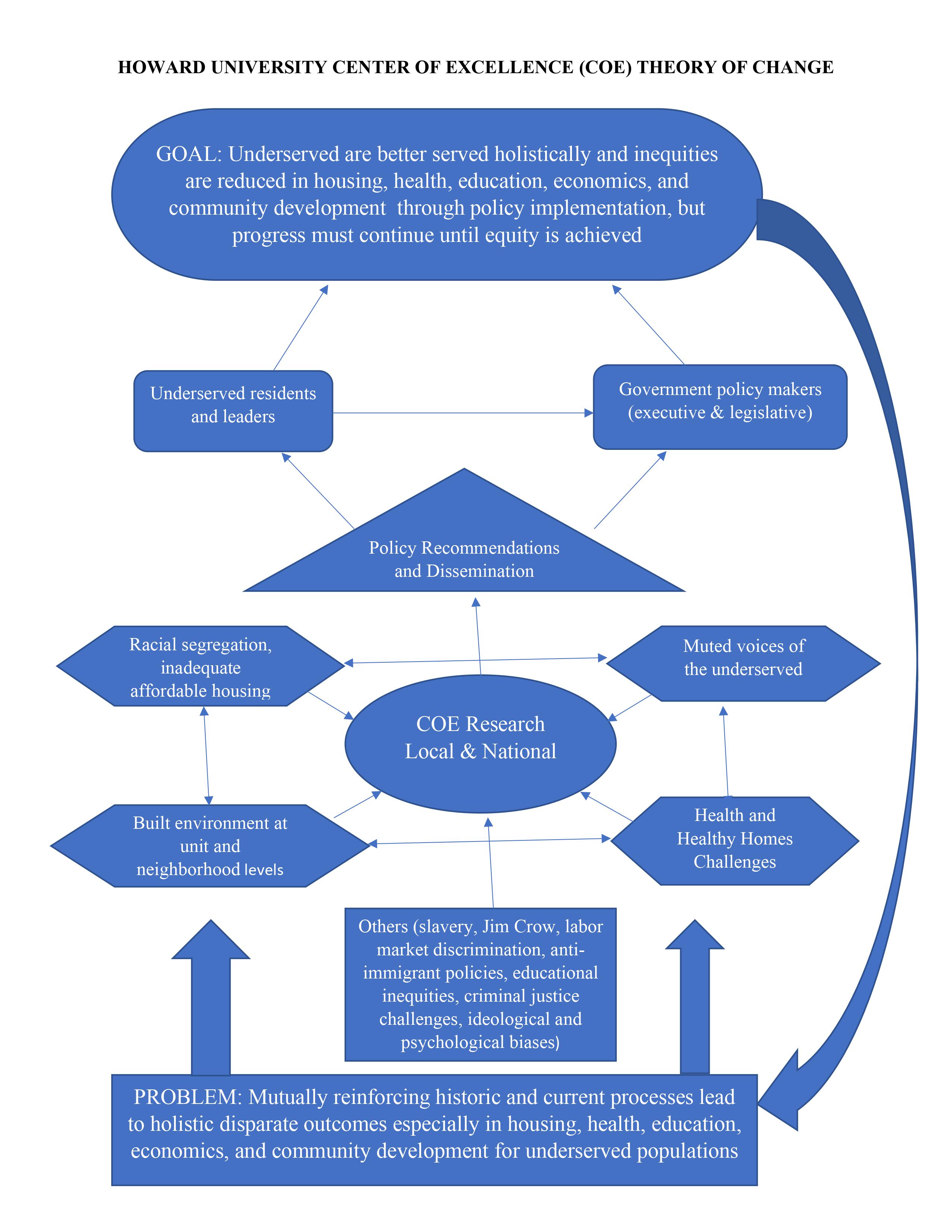 Four such interacting factors are housing, health, built environment, and voice. Housing -- limited, lacking in its availability and affordability, often segregated, and low quality in communities of color -- negatively affects the health and economic stability of largely Black and Brown communities as well as other underserved communities. Health challenges and economic instability stimulated by housing problems feed back into and reinforce housing challenges as well as obstacles to achieving amenity-rich, environmentally sound community development. The built environments including buildings and neighborhoods suffer and in turn contribute to ill-housing and ill-health. These dynamic processes taken as a whole frequently limit the engagement of the underserved, which in turn reinforces the processes that cause harm. The restorative policy recommendations that can flow out of research into the historic and dynamic aspects of these four components of distress for the underserved, if encouraged by an intensified voice of the underserved, and then acted on by policymakers, can help achieve the goal of the Howard University CHURP.

CHURP conducts research projects that address the four interconnected factors. Research projects address housing and community development issues including the dearth and decline of affordable housing and associated displacement and possible unintended negative consequences of current housing programming. CHURP will conduct studies on the related health and wealth issues exacerbated by such challenges. It considers the challenges of the built environment including both unit and neighborhood-level environmental challenges. CHURP will also investigate ways to enhance community empowerment so that the voices of the underserved, such as those of public housing residents, can better advocate for the resolution of inequities.

CHURP will take its findings public through policy white papers, shared on its website and Facebook page, in community settings, in workshops, publications, and in outward-facing conferences provided for policymakers. It will consult as requested by local, state, and national officials as well as community groups and other stakeholders.

CHURP is particularly attuned to the well-documented historic legacy of discrimination experienced by Blacks and other underserved populations and the way that savage inequalities are baked into the laws, governmental structures and policies, which may appear colorblind or universal, but nevertheless deepen the inequalities already extant. These challenges are all linked in a holistic interactive reinforcing process. Just as some point to the “school to prison pipeline” as an example of these structural challenges, the legacy of segregation created a perverse process whereby such exclusion and segregation was accompanied by inferior public services, from educational opportunities to health outcomes, further exacerbated by environmental pollution, food deserts, lack of tree cover leading to measurable heat islands in these communities, and heightened vulnerability to natural disasters. The mental and physical stress of discrimination, job loss, inferior and often unaffordable housing, is also linked to heart disease and high levels of anxiety and depression. These factors combine and lead to Black male life expectancy being several years lower than that of white men. These outcomes include the health outcomes of such “upstream” (i.e., economic insecurity issues) forces that heighten housing and health distress in the community. 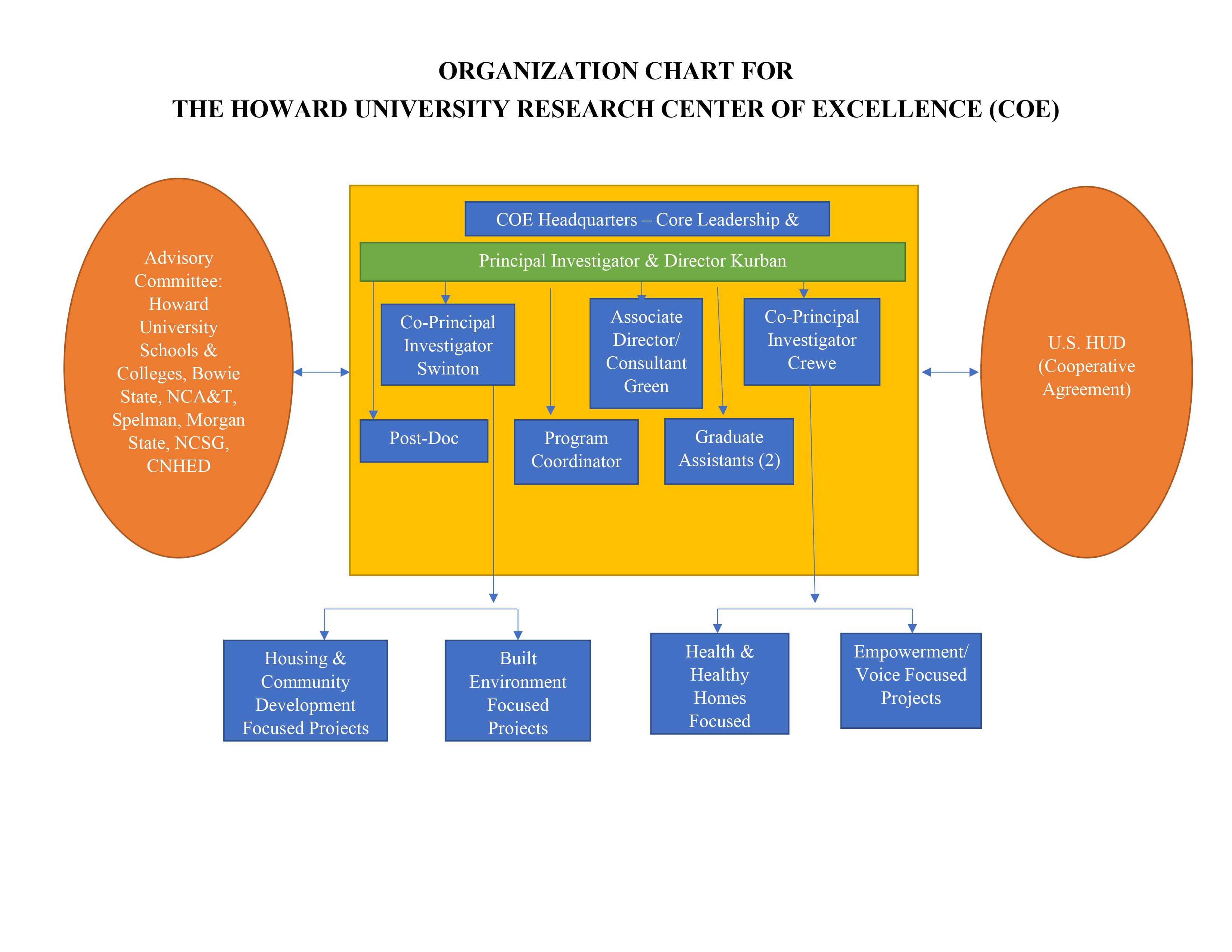